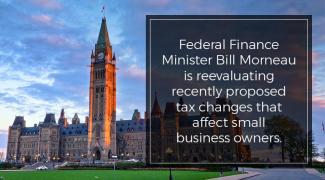 On October 16, 18, and 19, 2017, Federal Finance Minister Bill Morneau released new measures designed to counterbalance the proposals that were previously announced on July 18 of this year. This summary contains highlights of these new announcements and modifications to the previous proposals, which are not yet law. Clients should contact their Investors Group Consultant for information on how these proposals may affect their financial plans.

Effective January 1, 2018, the small business tax rate that applies to the first $500,000 of active business income will decrease from 10.5% to 10%. A further reduction from 10% to 9% will occur on January 1, 2019, ultimately resulting in a potential maximum tax savings of $7,500. This rate decrease was first discussed as part of the 2015 federal election campaign.

The federal government has acknowledged a number of concerns over the July 18, 2017 proposals:

What has been proposed to address the above concerns?

The Department of Finance indicates that the majority of owners of private corporations are men, and men represent over 70% of higher-income earners initiating income sprinkling strategies. The federal government indicates that it will consider the gender impacts of measures proposed to address tax planning involving private corporations, but has not provided any details to date on how that might be accomplished.

Mr. Morneau has indicated that more announcements will be forth coming. He also indicated that the informal consultation process continues through ongoing conversations with small business owners, stakeholders, local chambers of commerce, etc. Investors Group will follow these announcements closely and will communicate the impact they may have on your plan.

This report specifically written and published by Investors Group is presented as a general source of information only, and is not intended as a solicitation to buy or sell specific investments, nor is it intended to provide legal or tax advice. Clients should discuss their situation with their Consultant for advice based on their specific circumstances.